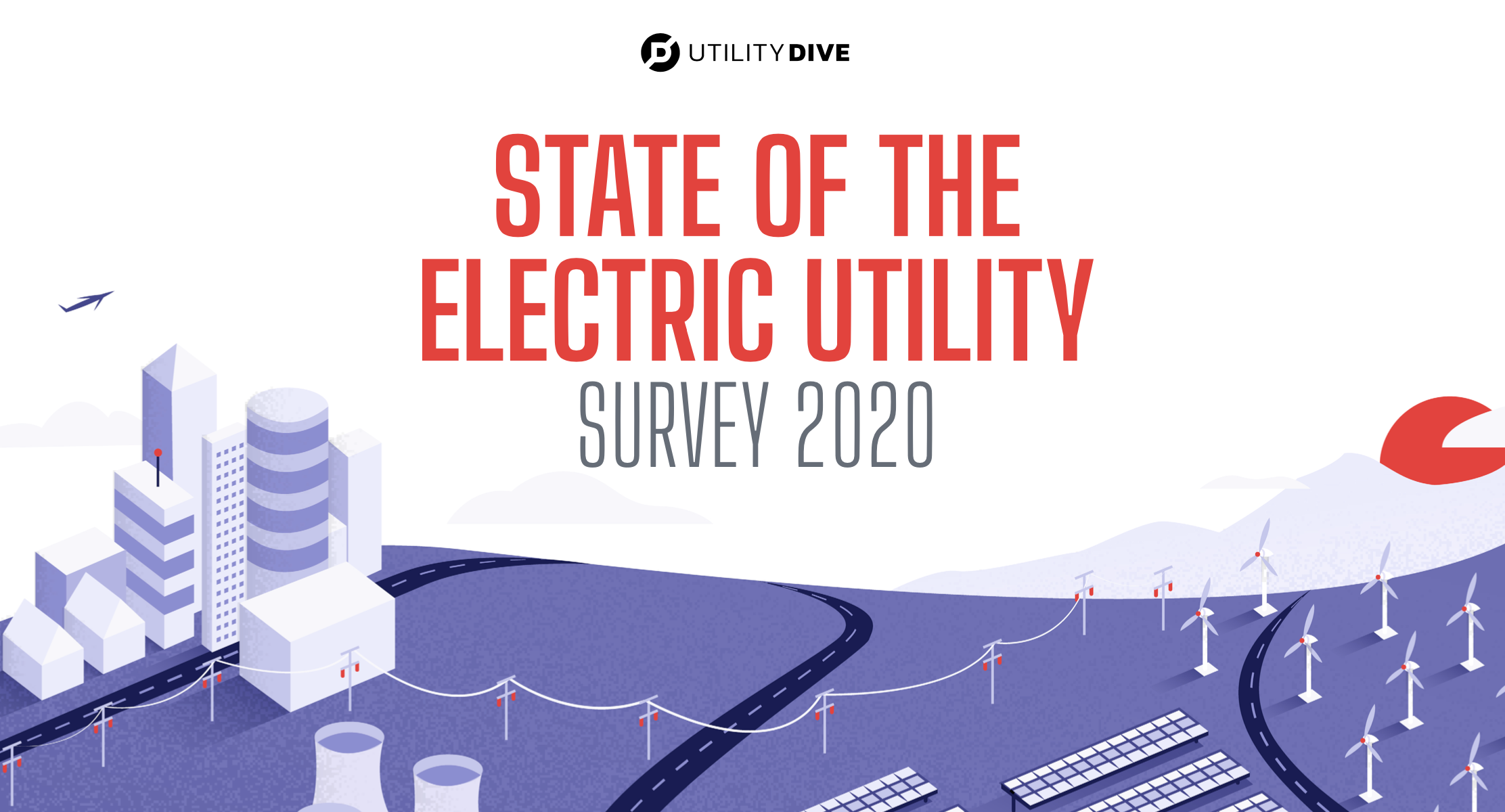 Each year, Utility Dive publishes a "State of the Utility" report.  The report is built mainly on survey response data from executives in the sector and includes investor-owned utilities, co-ops, municipal utilities, and retail energy providers.

I find these types of reports helpful because they help us understand what leadership in the industry is thinking about and also provide a glimpse of where budgets may be headed for the next year.

For the first time ever, renewables and sustainability topped the survey as the number 1 issue - both as a challenge and opportunity. From 2017-2019 the top issue for utilities was cybersecurity, but that issue has slipped back for now.

This year, 50% of utilities reported they plan to significantly increase grid-scale solar and storage in the next decade. One-third expected they'll use significantly more wind.

This shift in fuel mix creates challenges around maintaining reliability without raising rates. Utilities and grid operators are now considering new market structures to pay generation sources based on reliability, resiliency, and sustainability.

Many utilities are finding it hard to recover fixed costs under the existing constraints on rate design. The most popular solution among utilities was to move all customers to a time-of-use rate and increase fixed charges like delivery.

43% said strong federal policies, backed with clear targets and enforcement, is the best way to decarbonize the power system

I find this number self-serving, renewables are cheaper on an installed basis now, so the incentives from a generation lens are clear. I see the argument for better infrastructure to adopt renewables and the challenges they bring, but installing them is economical at this point.

30% are hardening their assets

Considerable room for growth remains on climate resilience. An overwhelming majority said there is "little to no attention being paid to climate resilience" or they were evaluating their options. However, this response does have some regional bias. For instance, utilities in Alaska, California, or in coastal areas report they are paying attention to and working on climate resiliency. Those in the midwest and south tend to be less enthusiastic about solving the problem. Intuitively this makes sense as Alaska, California, and Houston have all seen the impact of climate on their systems in recent years.

As we've mentioned before, a key consideration around the adoption of battery storage is how the resource will be included in the wholesale power markets. Current court cases among states, utilities, and trade groups will decide if batteries can participate in those markets in the same way as traditional generation assets.

The most interesting stats underlying this group is how utilities would like to leverage DER's and microgrids. Nearly half want to own and operate DERs as a regulated utility via rate-based investments that need regulatory approval. In a close second, 47% plan on partnering with a third-party provider to deploy microgrids or DERs — a potentially huge opportunity for those in project finance or PE groups looking for cash-flowing alternatives to oil and gas.

I found this stat interesting given the underlying statistics led me to conclude the opposite.

Perception is reality so if you are a startup in this space and selling to utility customers, it's important to note they feel compliant even if they may not be.
‍

66% have increased their budgets on digital operations and security

One key area where utilities are spending is digital hygiene. Most now train all employees on basic skills such as email use and reporting phishing attempts - a low-hanging fruit that utilities appear to be taking advantage of.
‍

52% indicated they are promptly upgrading and patching their systems

On the surface, this seems like a promising number, but it means 48% of utilities might not be upgrading or patching regularly. Even small holes in security can be exploited by nation-state backed hackers so this number is fairly concerning from my end.
‍

By contrast, EIA predicts overall load growth will decline by ~0.5% in 2020 and 2021. However, utilities need to predict load increases to justify spend on infrastructure expansion.

We've discussed at length the role policy played in the wildfires and subsequent blackout mess in California.  The dichotomy above highlights a major issue: we need to spend on upgrading our power grid, yet the reason we need to spend is so consumers can adopt and benefit from technologies that largely decrease energy consumption.  Several of these technologies will also make us less susceptible to extreme events like the blackouts in CA.

Historically, co-ops have served rural areas, but Americans are moving to the suburbs where single-family housing growth is strong according to the National Association of Homebuilders. This is changing the co-op model and forcing them to hire at increasing rates, however 77% reported problems finding qualified workers last year.

The current state of our communities is increasingly at risk, considering the growing stress placed on our aging utility systems and the human capital necessary to maintain and operate them.

Utilities are gathering more data than ever, but...

The report didn't include a lot of numbers around these responses, but one indicated "we're trying to adapt to an information-driven model while mired in an outdated traditional cost-recovery model based on energy consumption" - this remains a massive opportunity for startups interested in the sector. How do you unlock the data utilities are gathering and structure your business model in a way that it fits with the utility operating model?

As a new decade begins, the major issues for utilities appear to breakdown into three categories:

I can't leave this post any better than Utility Dive ended the report: "at its root, the evolving utility business boils down to adapting existing relationships and forming new ones to meet the challenges of the next decade." This is a hopeful outlook for startups looking to build products for the sector and one I hope the utility industry adopts moving forward.