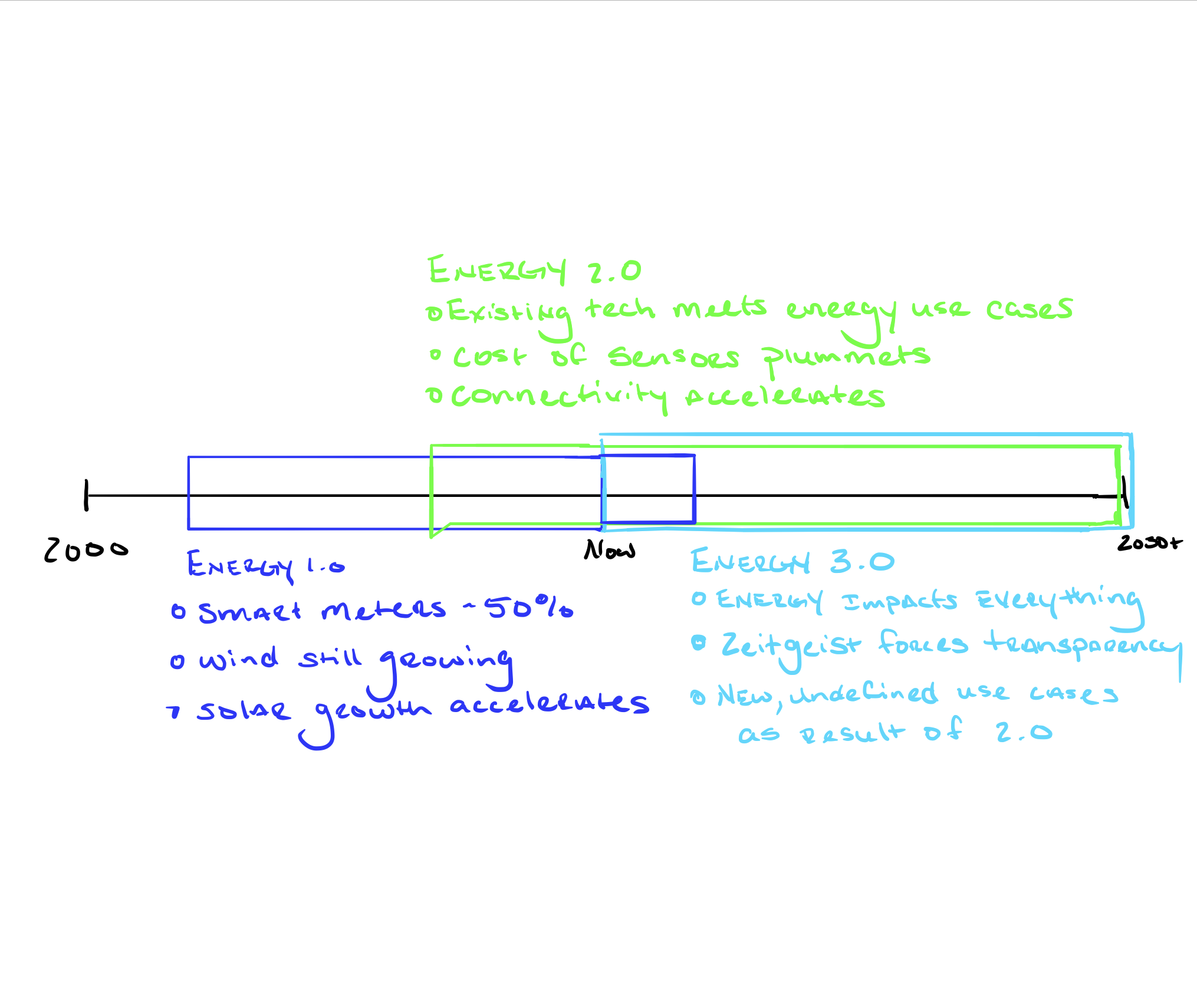 One of my favorite phrases regarding venture investing is “my job isn’t to see the future, it’s to see the present as clearly as possible”.  The last 12 months have seen a tidal wave of major energy-related events, which led me to begin taking more time to refine my thoughts on the current energy  (or power, or electricity, or climate, whichever word you prefer) landscape and where we are possibly headed.

For my purposes, the modern energy sector begins around 2000. Around that time, the Enron scandal makes national headlines and takes down a Big 5 accounting firm, TX deregulates its energy market, and large states like California, Texas, and Illinois create momentum for the renewable portfolio standard.

We’re in the very early innings of what will be a multi-decade transformation of a multi-trillion dollar sector.  When we look back on how our infrastructure and consumption habits shifted in the first half of this century, I believe we’ll see 3-4 phases all marked by their own distinct characteristics.
‍

Today is an exciting time to be in energy as all these phases are converging at a particular point in time.

Smart meters have reached over 50% penetration in the US and will double globally by mid-decade, creating new opportunities for consumer flexibility.  New generation sources like wind and solar are supplying power to the grid at record growth rates.

Meanwhile, existing but emerging technologies are finding their footing in energy.  Innovations in hardware such as drones and connected sensors with compute power have increased the applications available in areas like remote asset monitoring.  The sector is now in the midst of processing these new data sources, combining them with existing ones, and analyzing them using techniques from predictive analytics and machine learning all for the first time.

Finally, big players in consumer products and finance see sustainability as an operational requirement.  Starbucks and Microsoft have announced big policy shifts in sustainability. Those changes were made largely for two reasons:

1. Large financial institutions that control the cost of capital have inserted sustainability into their investment criteria

2. New hardware deployed as smart meters, solar panels, wind turbines, and EV’s all made significant strides during the time period

3. Fracking simultaneously decimated the first cleantech revolution and put the US in control of the global energy market.
‍

This era kicked off with deregulation in Texas (California was re-regulating) and ~5 years later grid modernization efforts like smart meters and renewable generation assets.

Wind capacity grew tremendously from 2001 onward and is expected to more than double by the end of the 20’s, yet still only makes up around 5% of total global energy generation.

Solar has also grown massively during Energy 1.0.  Since 2010, global capacity has increased 5X and is expected to account for 60% of renewable power generation growth in the next decade according to the IEA.
‍

However, despite all of the growth in renewable generation, it was fracking that won the day.  From 2010 until 2019, natural gas grew from roughly 25% of power generation to ~40%  — capturing almost all of coal’s decline.

While renewables made headway and were deployed at scale for the first time, Energy 1.0 has been more about replacing coal than renewables.  Ironically, it was fracking that both accelerated coal’s decline and prevented renewables from rapidly taking market share.

Yet, innovation within the solar and wind industries sufficiently decreased present day prices to make both sources of generation competitive moving forward and the deployment of connected hardware ushered us into a new period.

If I were to list the phase having the most impact on the sector today, it would be Energy 2.0.

This period is somewhat of an awakening or renaissance for the sector.  The opportunities for technology are becoming clear and the industry is undergoing a massive transfer of responsibility from humans to:

Despite the accelerating deployment of these technologies and a wave of new startups entering the industry, extreme weather events have shed light on the inadequacies of power infrastructure in California and Puerto Rico.

Utility regulation has played a large role in our grid becoming outdated.  The US utility model is still based on OPEX and ROE, but in 2013 the UK passed RIIO which incentivized utilities to focus on TOTEX (total expenditures).  Under this model, utilities in the UK are rewarded on innovation, efficiency and renewable energy deployment.

It’s early, but the signs have been encouraging as the UK now leads in renewables as a % of overall generation, prices have remained steady, and reliability remains unchanged all while customer satisfaction increased.

Energy 2.0 is also the beginning of the “Internet of Energy” where the traditional top-down power grid structure begins to look more like a true network of connected end points where data and electrons flow freely and efficiently.  New devices that have entered the ecosystem in the last 10 years include, but are certainly not limited to:

These developments ultimately give consumers the choice in how they participate within the grid.  Yet, in large part consumers haven’t taken advantage of them, which leads me to the last characteristic of Energy 2.0.

Consumers begin to consider sustainability in some purchasing decisions including those involving energy consumption, but it is still largely a “want” not a “need” for a large portion of the population.

Which brings us into Energy 3.0, the phase where:

1. Cost and sustainability reach the point where consumers no longer have to make a decision between the two, but transparency matters.
‍
2. Energy (and sustainability) become larger forces in other industries, notice the arrows in the diagram above push outward
‍
3. Variable renewable sources (wind and solar) grow to ~1/2 global power generation and begin to create new challenges for utilities
‍
4. Electric vehicles become the first device that brings interaction with energy consumption to the top of a consumer’s mind
‍
‍

We’ve clearly entered this phase over the last 6-18 months as some of these shifts are already underway, specifically the first two:

- Solar and wind costs are now on par for energy generation, despite capacity constraints.

- Traditional vehicle manufactures are beginning to make cars that are close in price to other models, though consumers have indicated they won’t pay more than $1K more for EV’s.

- Blackrock and Goldman Sachs have announced sustainability funds or mandates for investments affecting the cost of capital.

These developments will lead to a large number of new opportunities that are both directly and indirectly related to the energy sector itself.  A few relevant examples include:

* As the popularity of touting sustainability achievements grows, so to will financial market and/or regulatory accountability standards surrounding carbon accounting.

* Recent studies have shown, the a large number of VRE’s could put localized power grids at risk for under supply.  As a result, demand flexibility should continue to be a focus moving forward alongside load forecasting      driven by advanced methods.

* Storage at scale is on the horizon, but vehicle-to-grid (V2G) technology could solve the storage problem as a result of VRE’s in a novel way where consumers are paid based on when AND where they decide to charge.

* Project finance and insurance will begin to consider the long-term affects of climate change on assets and new cash flowing asset types emerge.

How fast are we moving through these phases? I have no idea. But there’s good reason to believe that in this second and third phase of energy, the growth rates will continue to accelerate.

It’s possible, you’ll have read this and said “these are all happening”  especially the third phase, and I know that’s the case because for me it feels as though the energy future is coming into focus, today.